Explore culture, history, nature, and more at virtual events or events at The National Parks Store. To find events among the 70+ national parks that partner with Western National Parks Association, visit the Discover Our Parks page and choose a partner park. 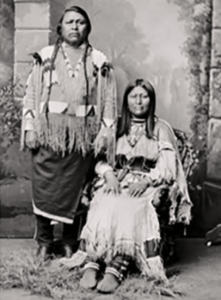 Great Sand Dunes and the San Luis Valley are an integral part of the traditional homeland of the Ute people. On Saturday, July 30 at 10:00 am, Ute Elder Roland McCook will present Ute culture and history at the park amphitheater, while Morgan Dawn Allen helps children make free beaded bracelets. The event is free, but regular park entrance fees are in effect at the entrance station.

Roland McCook was raised in traditional Ute ways on the Uintah and Ouray Indian Reservation in Utah. Later sent to boarding school, he resisted attempts to strip him of his heritage and identity. Roland is a member of the Uncompahgre Band of the Ute Tribe, and former chair of the Northern Ute Tribe. He has served in a variety of capacities for his tribe, Native American Cultural Programs (NACP), the Smithsonian’s Native American Repatriation Review Committee, and History Colorado.

This special event is sponsored by Western National Parks Association.