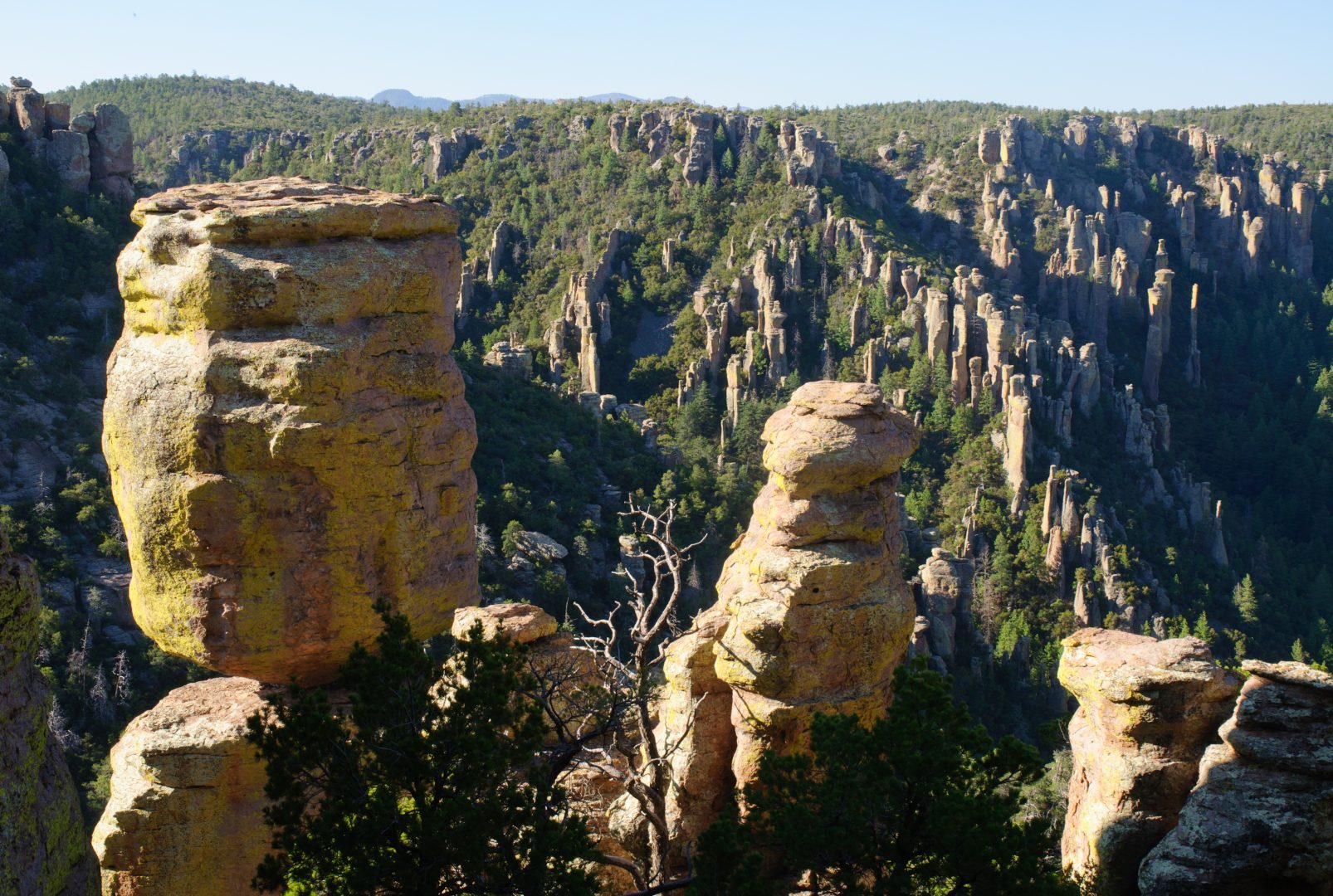 When I was a park ranger at Chiricahua National Monument, now more years ago than I’d like to admit, I was lucky at seeing wildlife.  I saw coatimundis on my first or second day in the park – usually only visitors get to see them that quickly!  I also had a baby spotted skunk come up to my housing’s sliding glass door.  When I called my housemate over and we crouched down to see better, the baby got worried and sprayed the house.  Lucky, indeed.

The funniest wild animal encounter I had, though, was with a flock of turkeys.  I was leaving the park for the long Thanksgiving weekend and ahead of me the birds stood in the roadway.  I expected them to move quickly away from my approaching car, but instead they waddled in front for a long while.  Letting me ponder the story from Juan Nentvig, a Jesuit who wrote between 1750 and 1767, about the name Chiricahua coming from an Opata word that means wild turkey, or range of wild turkeys.  As well as letting me reflect on the fact that I hadn’t yet seen many wild turkeys in the time leading up to the European-American tradition of gorging on turkey.  Did the turkeys know that hunting on the NPS site is banned??

The turkeys that I saw at Chiricahua that day were likely Gould’s Turkey (Meleagris gallopavo mexicana).  I am not a birder, and more recently was shocked to find out that there are only two species of wild turkey in North America, but that the North American Wild Turkey (Meleagris gallopavo) has five subspecies.  More than that, there were 6 subspecies, but the South Mexican turkey (Meleagris gallopavo gallopavo) has gone extinct.  The ones in the Chiricahuas are likely Gould’s because the birds were also, almost, hunted out of the Chiricahua mountains.  It was just in the 1990s that the Arizona Game and Fish Department and US Forest Service worked with partners including the National Wild Turkey Federation and the Centro Ecologico de Sonora, to relocate wild Gould turkeys from Mexico and release them into mountain ranges in southern Arizona called, Sky Islands, including the Chiricahuas.

Turkeys were plentiful throughout North America, until over hunting brought multiple subspecies down.  And at least thirteen of our four corners NPS park units have turkey artifacts.  As an archeologist, this intrigues me: what was going on with them before the settler colonial hunting?  A recent (in archeological terms) flood of articles and research helped me gain a better understanding.  First, please check out Mary Weahkee’s YouTube video (2020) about making a turkey feather blanket.  Anyone who has been shocked at the price of a feather comforter will gain a new appreciation of the skill and time that goes into making cordage embedded with turkey feathers, and then weaving it together to make a fluffy, warm blanket or cloak for those Sky Island and Colorado Plateau winters. Clearly different from today’s packed-feather blankets, and even more impressive.

There are ancient villages where archeologists documented turkey pens, and other evidence of the rearing of these birds.  Egg shells are found at some NPS units, for instance.  Archeologists assumed from this evidence that ancestors were eating the birds.  After all, they figure prominently in feasting for those of Western European decent.  Historic documents report that Coronado, the Spanish explorer and conqueror, encountered turkeys at the Pueblo of Zuni where “The Indians tell me that they do not eat these in any of the seven villages, but keep them merely for the sake of procuring feathers. I do not believe this, because they are very good and better than those of Mexico” (Ramusio, 1606; translated by Schorger 1966). Coronado did not take people at their word, but I do.  Turkey bones are not usually found in trash mounds, and when we listen to descendant communities today, we are again told that turkeys were not usually on the menu.  In fact, they were treated as sacred, and it is again their feathers that tell the story best.

New Mexico Zuni archeologist and anthropologist, Edmond Ladd, worked for the NPS for decades.  Ladd’s master’s thesis focused on ethno-ornithology, and later work included a chapter on this topic in Stars Above, Earth Below: American Indians and Nature (1998).  Ladd shares that the turkey is a revered bird, with its feathers being used alongside eagle feathers on prayer sticks.

Recent research by archeologists uses advanced technology to look at the nuances of turkey husbandry pre-Contact. For instance, Conrad and colleagues (2016) used a scanning electron microscope (SEM) to identify when eggshells were broken, to try to identify intentionality in breakage versus hatching.  Many others have been spurred on by the research Camilla Speller (2009, 2010) has done on domesticated turkey DNA.  While the commercially available turkey today is descended from the now-extinct South Mexican turkey (Meleagris gallopavo gallopavo), the turkeys found in archeological contexts are a separate line, descended primarily from the Eastern (Meleagris gallopavo silvestris) with some genetic input from the Rio Grande turkey (Meleagris gallopavo intermedia).  Little evidence of the wild Merriam’s Turkey (Meleagris gallopavo merriami) is found, indicating that the Ancestral Puebloans did mix a few local birds into their flocks, but for the most part, traded a distinct, single lineage for all purposes, including feathers.

As for any Thanksgiving dinners this month, I think back to that Coronado quote – while he apparently unceremoniously ate the revered turkeys of Zuni Pueblo, he described them more favorably than the South Mexican turkey (Meleagris gallopavo gallopavo).  And the South Mexican subspecies is the one that commercial turkeys are descended from today.  I’ve never been a big fan of turkey, and maybe this is the reason…  Either way, this November, I recognize the enduring presence of Indigenous people on these lands, and I give them thanks to be able to learn about, work on, and share regarding their traditional lands and ways.