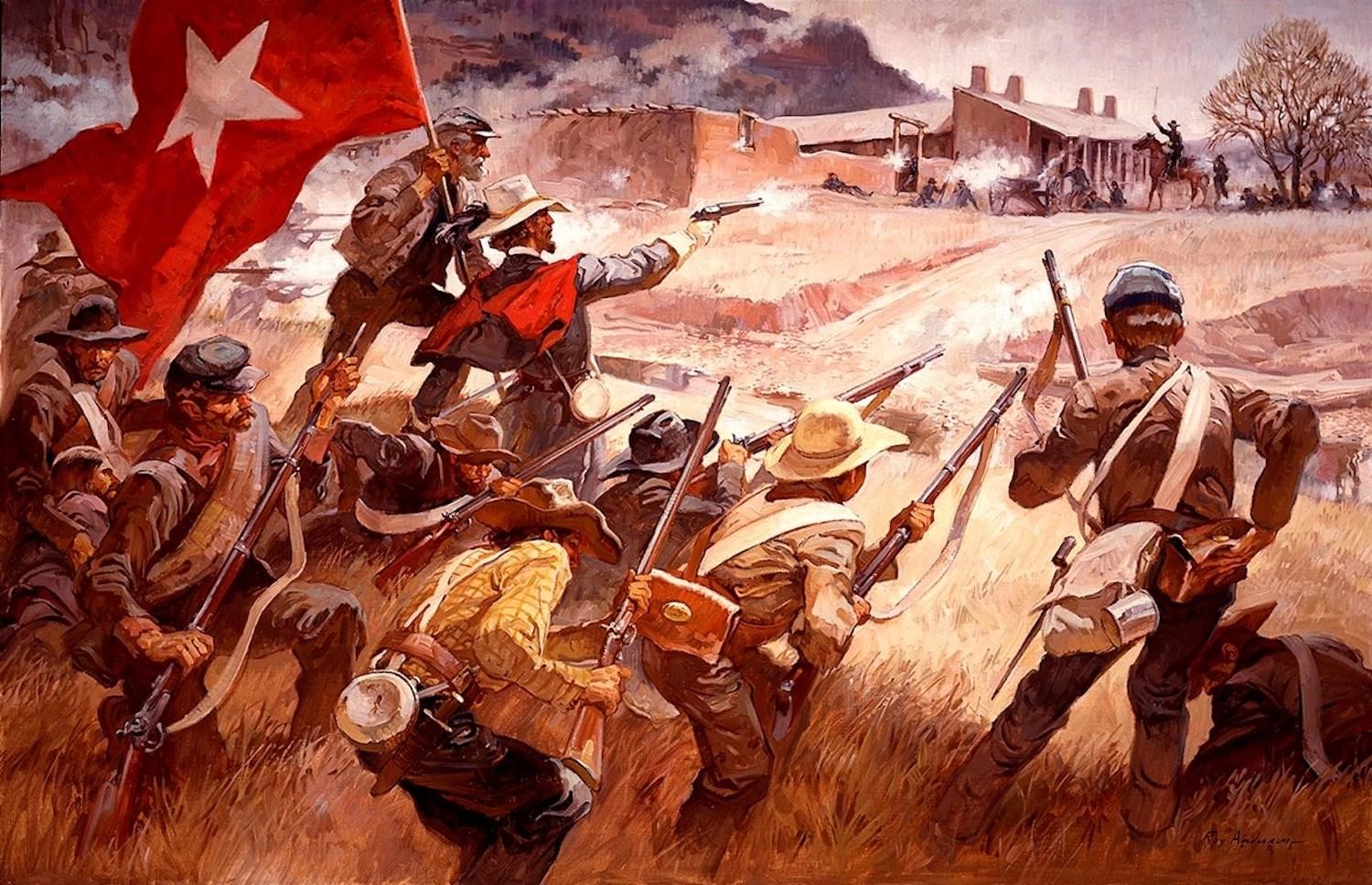 The battle marked the end of the Confederacy’s New Mexico campaign. Their plan for the campaign was pretty straightforward. Brigadier General Henry Hopkins Sibley and his Texan volunteers would advance up the Rio Grande from El Paso to Albuquerque and Santa Fe. From there, they would move eastward along the Santa Fe Trail, crossing the mountains at Glorieta Pass, and then turn north. After seizing the supply base at Fort Union, Sibley would take the mines of Colorado while disrupting federal communications with California, Nevada, and Oregon.

The key to the campaign was logistics. The Confederates would have a long supply train stretching back to El Paso, and they needed Fort Union’s supplies to make the plan work. The Union commander, Colonel Edward R. S. Canby, lost every battle but won the campaign because he focused on the Confederate supply problem.

They fought various engagements up the Rio Grande before arriving at the Glorieta Pass region in March. On the third and decisive day, Canby split his forces. The larger part fought a delaying action near Pigeon’s Ranch. They gradually gave ground to Sibley’s Texans while remaining in good order astride the Santa Fe Trail.

Canby sent about two-fifths of his troops over Glorieta Mesa to the Confederate rear, where they found and destroyed the rebel supply train. Without supplies, the Confederates had to retreat to El Paso, using a difficult route through the mountains. Fewer than half found their way back.

When interpreting the battle, the National Park Service defines it as a tactical Confederate victory. After all, the rebels held the ground at the end of the day. The park also notes that “the Confederate victory was short-lived” because Sibley no longer had his supply train.

That perspective is understandable. It rests on the fight around Pigeon’s Ranch, Glorieta Pass, and the Santa Fe Trail. That fight features two opposing forces trying to take or defend ground. It feels like a battle should feel—and, of course, it was a genuine battle.

Not only do visitors expect a battlefield to involve military units moving around it, but many military historians would also tell the story exactly that way. We see that perspective in a lesson plan the park developed for students: “The Battle of Glorieta Pass represented the high-water mark for a bold Confederate offensive into Union Territory on the western frontier. Here, volunteers from Colorado clashed with tough Texans intent on conquering New Mexico.” Tough soldiers fought bravely on both sides.

The Texas Division of the United Daughters of the Confederacy raised the first monument on the battlefield itself in 1939. The thousands of years of rich history have been preserved at Pecos National Historical Park, which has served as scenery for Pueblo and Plains Indians, Spanish conquerors, Santa Fe trail settlers, railroad workers, and even Route 66 travelers. Discover more about this historic location in the book Pecos National Historical Park Ancestral Sites Trail Guide or purchase an official park product from the Western National Parks Association.

A focus on brave soldiers also produced the first interpretation on the site. In 1866, New Mexico recognized its soldiers on one side of an obelisk in downtown Santa Fe, honoring “the heros of the Federal Army who fell at the battles of Cañon del Apache and Pigeon’s Rancho (La Glorieta), fought with the Rebels March 28, 1862.”

Remembering battlefield bravery motivated park advocates. The Glorieta Battlefield Preservation Society, a group of regional Civil War reenactors, worked to preserve the site, which had remained in private hands. The Council of America’s Military Past, the United Daughters of the Confederacy (UDC), and other military heritage groups worked with them to convince Congress to establish the Glorieta Battlefield Unit of Pecos National Historical Park.

The NPS then began to update this landscape of memorialization it had inherited. In addition to leaving the stone memorials in place, the historical park installed a collection of modern interpretive signs on the Glorieta Battlefield Trail. The trail makes a lovely hike today.

Park advocates helped fund the new interpretive trail and most of the signs. Signs funded by Texan and Confederate groups highlight the bravery of Sibley’s troops, and the ones placed by the State of New Mexico highlight the role of Hispanos, New Mexican Volunteers, and U.S. Regulars. While they also discuss how the Union soldiers burned the Confederate wagons, those signs place greater weight on the fight around Pigeon’s Ranch at Glorieta Pass. Again, the action on a conventional battlefield seems more important.

Taken as a whole, those signs tell a richer version of the story than the stone markers, and a more accurate one. Still, one might go further and turn current interpretation on its head. By dividing his force in the face of the enemy, General Canby had clearly decided to make the wagon train central to his battle plan. The 750 troops near Pigeon’s Ranch needed only to protect Union lines of communication behind them while the other 500 men circled behind Confederate lines. In this alternative perspective, the ground of Glorieta Pass mattered much less than the supply train—making this a decisive Union victory.

A second feature of the campaign also contributed to the Union victory. Well before the battle itself, the Union had won the battle for the hearts and minds of New Mexico’s citizens. The Confederates supposed that the locals, having become involuntary subjects of the United States in 1846, might welcome “liberation.” The rebels hoped they could rely on those locals for some supplies along the way. As it turned out, New Mexicans liked Texans even less than they liked gringos, and were not inclined to help out.

The battle for hearts and minds also brought New Mexican volunteers to Canby’s side at Glorieta. Lt. Colonel Manuel Chavez, who led those volunteers, had the local knowledge to guide the Union forces over the mesa to the Texans’ wagons. The Confederates had no good local sources of supplies once the wagons were gone, dooming their assault.

Robert Pahre is a professor of political science at the University of Illinois, where he teaches and researches the politics of national parks. This article is part of a current book project, titled Telling America’s Stories.