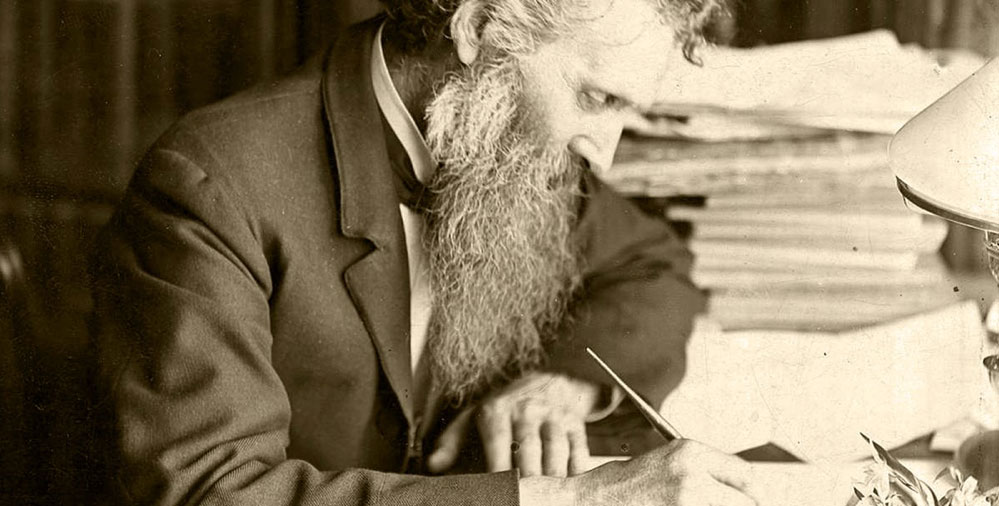 John Muir: A Passion for Nature

This August 25th marks the 106th anniversary of the National Park Service.

Here at John Muir National Historic Site in Martinez, CA, one of the main people we celebrate is John Muir and his role in inspiring the nation towards a conservation movement and the creation of the national park system. In fact, he is remembered as the “father of the National Parks.”

Just like many important influential people in this nation’s history, John Muir was an immigrant. Born in 1838 in Dunbar, Scotland, Muir’s family moved to Wisconsin when he was 11 years old. He and his sisters were forced by their strict religious father to work very hard to clear land, plow, and maintain a family farm. Against his father’s rules, Muir hid away in the basement at night, teaching himself engineering and botany and reading any book he could get his hands on. His mechanical mind led him to build clocks, thermometers, and measuring devices. He invented machines, such as a bed whose alarm clock flips the bed vertically, launching the sleeper to their feet. That machine won him first prize at the Wisconsin State Fair and set him on course to enter the University of Wisconsin.

Muir might have stayed an inventive machinist if he hadn’t nearly lost his eye in a carriage shop accident at age 29. Confined to a darkened room for many long days to heal, he came to realize he wanted to use his precious sight to see all of God’s splendor – the great outdoors. Muir then walked 1000 miles from Kentucky to the Gulf of Mexico “by the wildest, leafiest and least trodden way possible,” studying plants and trees along the way.

There are essential people in each of our lives that support our dreams. For Muir, one of these people was Jeanne Carr. She was the wife of a university professor he knew, and he called her his spiritual mother. She introduced him to many important people, but most important of all, his future wife Louie and Louie’s family, The Strentzels, residing in the East Bay of San Francisco.

The father, Dr. John Strentzel, was a Polish doctor and horticulturist. He emigrated to Texas in 1840 and met a woman named Louisiana. They married and had two children, Louie and Johnnie. In 1849, they headed out on a wagon train to California in the Gold Rush and endured great hardship. Instead of looking for gold, though, the Strentzels mined the miners, building a general store, hotel, and ferry service along the Tuolumne River. They later settled along the Merced River and took up farming. But tragedy struck when they lost their property in a flood. And, worst of all, they lost a four-month-old newborn named Lottie.

Grieving their losses, the Strentzels yet again persevered and moved to a 20-acre plot in the beautiful Alhambra Valley near the town of Martinez, California. Dr. Strentzel used his Hungarian vineyard knowledge to begin experimenting with a wide variety of grapes, fruit and nut trees, as well as ornamental plantings. His small experiments soon grew into a lucrative fruit ranch of 26,000 acres, with labor provided by Chinese workers. Sadly, the son Johnnie died at 9 years old from diphtheria, and Dr. Strentzel reported, “For years, we were inconsolable.”

So, when a smart charming John Muir came to visit the Strentzels in Martinez, they were overjoyed to host him. Muir and Louie married in 1880 and had two daughters, Wanda and Helen. The family let Muir share the management and wealth of the ranch business, and with this influential position, he was able to catch the eye of politicians and business owners in his future advocacy for protecting wild spaces. If not for John Muir marrying into a pioneering, resilient, and wealthy family, he might have been just a poor rambling leaf-lover still wandering around Yosemite.

Muir’s passion for nature brought him to every continent except Antarctica. He experienced fantastic adventures – climbing a 100-foot tree in a thunderstorm, inching across a narrow ice bridge in Alaska, and spending a night in a blizzard on Mt. Shasta. Muir transformed his adventures into articles and books that sparked peoples’ interest in nature. Muir’s descriptions of glaciers and sequoias brought the beauty of nature to readers nationwide.

As increased settlement ended the western frontier in 1890, people began to worry about using resources wisely. Unchecked grazing, logging and tourism were damaging Yosemite. In response, friends and family encouraged Muir to write. He struggled with writing, calling it “like the life of a glacier; one eternal grind.” Yet he recognized the power of prose and worked tirelessly in his “Scribble Den,” his upstairs office in his Martinez home.

Wild spaces should be set aside for all to enjoy, Muir argued. He urged people to write politicians and “make their lives wretched until they do what is right by the woods.” His articles “The Treasures of Yosemite” and “Features of a Proposed Yosemite National Park” appeared in Century Magazine, which boasted more than one million readers. A month later, Congress designated Yosemite a national park.

Muir’s popular writings caught the attention of President Theodore Roosevelt, who invited him to go camping in Yosemite in 1903. Roosevelt left behind reporters and his Secret Service agents for the company of two park rangers, an army packer, John Muir and the wild. They spent three days exploring meadows and waterfalls and three nights discussing conservation around campfires. One night, five inches of snow fell, and the president arose to white flakes on his blankets. Inspired by his trip with Muir, Roosevelt set aside more than 230 million acres of public land – an area bigger than the size of Texas – that included five national parks and 18 national monuments.

We all have legacies that will extend beyond our lifetime. Muir died on December 24, 1914 at age 76, just two years before the establishment of the National Park Service. The Service was created when the Organic Act was signed by President Woodrow Wilson on August 25, 1916. Even after Muir’s death, his journals and other writings provided material for many more influential books.

Thanks to Muir’s vision, you can now visit 423 National Park Service sites. Called “America’s Best Idea,” the United States’ unique system of protecting natural and cultural heritage spurred other countries to do the same. Muir’s writings and the places he fought to protect continue to inspire people worldwide to discover and connect with nature.

However, Muir’s conservation legacy is not without controversy.  Two years ago, the Sierra Club made headlines with their July 2020 article “Pulling Down Our Monuments”, in which they expressed a desire to confront the racist perspectives held by some of their early leaders, as well as their “substantial role in perpetuating white supremacy”.  Some excerpts from the article include: “[Muir] made derogatory comments about Black people and Indigenous peoples that drew on deeply harmful racist stereotypes, though his views evolved later in his life”. “As the most iconic figure in Sierra Club history, Muir’s words and actions carry an especially heavy weight. They continue to hurt and alienate Indigenous people and people of color.”

John Muir NHS welcomes the opportunity to discuss and bring to light these more troubling components of Muir’s work and legacy. We are dedicated to researching, interpreting, and sharing all aspects of Muir’s life and career – his family life in Martinez, California which afforded him wealth and privilege, the breadth and magnitude of his conservation work all over the world, as well as his negative views on people of color, and how those views – as well as the involvement of other conservation leaders with the eugenics movement – may have influenced the American conservation movement.

We have begun collaborating with Yosemite National Park and the John Muir Center at the University of the Pacific in conducting research on the more troubling aspects of Muir’s history, and are planning for a new exhibit at our site which will include online multimedia content exploring these topics, shedding light on the racism in some of Muir’s writings and the impacts they had on often underrepresented communities.

John Muir’s complex legacy – both the inspiring and the problematic – lives on at the John Muir National Historic Site and in our daily actions. There will always be a need for people to stand up and change their communities for the better, as well as an obligation to make sure that those changes are able to benefit even the most vulnerable in our society.