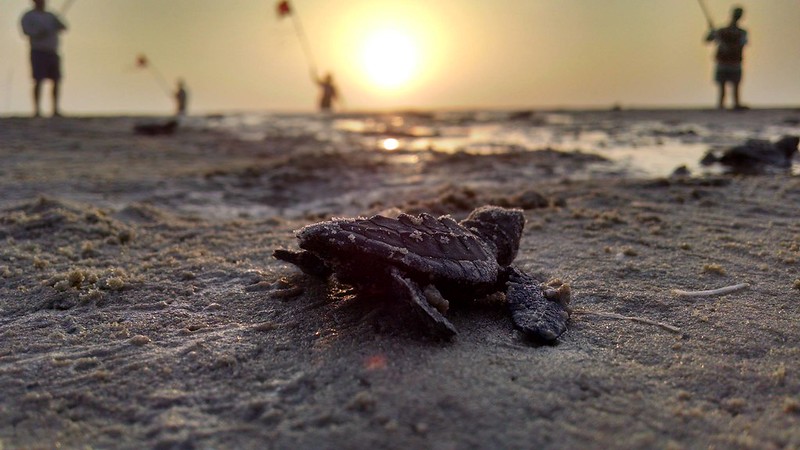 Imagine the unblinking eyes of a half-buried plastic baby doll staring up at you from the beach sand. Looking out toward the ocean, you see a dozen baby doll heads bobbing before you.

It happens—and only a stone’s throw from Padre Island National Seashore. Within the park, everything from leather ottomans and tangled fishing line to Styrofoam coolers and backpacks have washed ashore. Trash is a real problem, according to Kelly Taylor, public information officer and chief of interpretation and education for the park.

It’s such an issue, in fact, that Padre Island National Seashore has taken matters into its own hands—with the help of volunteers and the Western National Parks Association (WNPA). In 2022, WNPA provided support for two trash pickup events at Padre Island.

“We don’t have to advertise the need,” said Taylor. “The trash is everywhere, and there is this natural inclination for people to pick it up.”

It’s a continually growing problem, she says, exacerbated by geography. Padre Island National Seashore is located in the Coastal Bend, where two major currents converge just offshore. “One current flows west and south along the coast,” said Taylor. “It brings with it everything that flows out of the Mississippi River and the other rivers that drain into the Gulf.

“In a nutshell, because a lot of the marine debris that is washing up on the shores of Padre Island is literally coming from other parts of the world, it is going to take a commitment from leaders across the globe to reduce the amount of trash that ends up in our oceans and ultimately on our beaches,” said Taylor.

In another initiative 60 miles from the visitor’s center, the Mansfield Channel Clean Up removed trash in a beach area accessible only by four-wheel-drive vehicles.

So, what is the physical weight of all this unwanted trash? During the largest annual cleanup events hosted by Padre Island National Seashore, in the spring and fall, Friends of the Padre collected 63 tons of beach debris (125,460 pounds).

“We are stewards of the Earth,” said Taylor, grateful for volunteers and debris-clean-up support. But she recognizes there is much more to do. “To quote Richard Nixon, ‘If future generations are to remember us more with gratitude than with sorrow, we much achieve more than just the miracles of technology. We must also leave them a glimpse of the world as God really made it, not just as it looked when we got through with it.’”

At first blush, trash pickup may appear a bit unglamorous, but your support of WNPA allowed the volunteers in 2022 at this small national seashore to make a big impact.