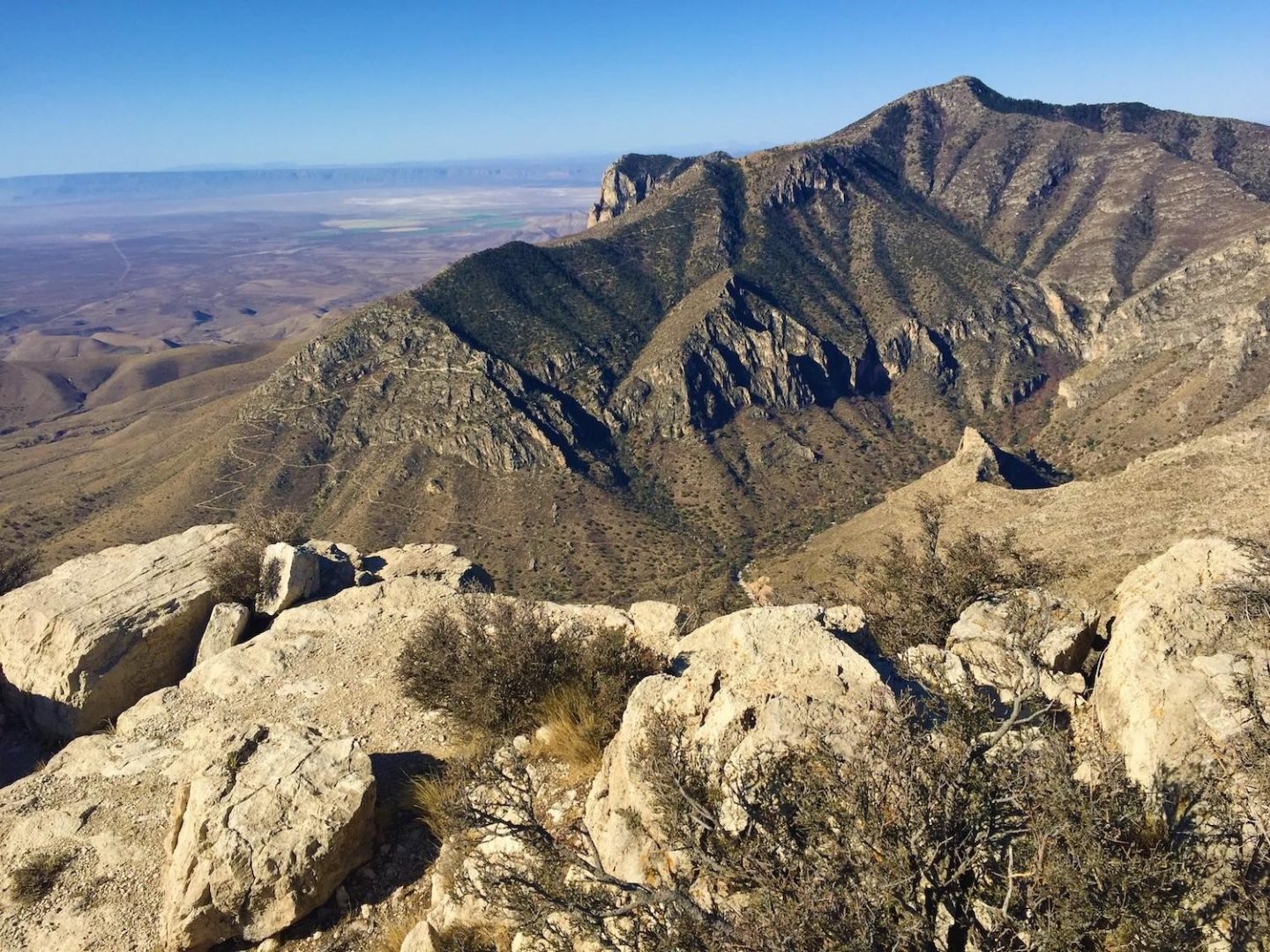 It’s Spring 2021, and I find myself looking to get outdoors; yet, that year, I’m also seeking roads less traveled. While some national parks are so busy that they require reservations, others make it easy to get off the beaten path, like Guadalupe Mountains National Park in Texas.

U.S. 62/180 is just the road I’m looking for, narrowing into a two-lane highway that stretches more than 150 miles from Carlsbad, New Mexico, southwest toward El Paso. The country around me is wide open, with long, sweeping views except for a prominent ridge of mountains coming into view. The Guadalupe Mountains stand like a secret gateway in this remote area, as they have for millions of years.

The length of this highway roughly matches the length of the ancient Delaware Sea—around 150 miles long and 75 miles wide—that formed here within the Permian Basin 260 million years ago. The rock formations I see before me were once a huge underwater reef, now known as the Capitan Reef, one of the best-preserved Permian fossil reefs in the world. As this inland sea was cut off from the ocean over time, it evaporated, silt filling the basin and burying and protecting the reef structure. Then, 20 million years ago, powerful geologic forces uplifted the fossilized reef along nearly vertical faults.

Today, the cliff-faced El Capitan stands 8,064 feet above sea level, while Guadalupe Peak, the highest point in Texas, reaches an elevation of 8,749 feet. In fact, nine of the 10 highest peaks in Texas are located here, and yet Guadalupe Mountains National Park also drops below 4,000 feet. The contrast accentuates El Capitan’s chiseled promontory towering overhead, creating a distinctive landmark for travelers below.

It has always been a vital stop. The limestone of the reef formation allowed natural springs to bubble to the surface in these Chihuahuan Desert mountains. In addition, nearby salt flats provided important nutritional minerals, as well as the means for early hunters to preserve game and tan hides. Nestled within the peaks, a pine-forested area called The Bowl is home to the only herd of elk in Texas. First the Mescalero Apache, or Nde, and then European explorers, Mexican and American settlers, and U.S. Cavalry troops stopped here, accessing the water, salt and game, and resting under bigtooth maple and red-barked madrone trees. A spot called The Pinery (for its stand of protective trees) marks the location of the old Butterfield stage stop, the first transcontinental transportation and communication system in the country.

The Butterfield Overland Mail, a precursor to the Pony Express, ran twice-weekly service from St. Louis to San Francisco from 1858 to 1861. Its contract with the Postal Department to deliver mail within 25 days was unbroken until interrupted by the Civil War. From the beginning, passengers rode in the coaches as well, eager to travel just as swiftly across the country: five miles an hour, around the clock, covering an average of 120 miles a day.This station at 5,534-foot Guadalupe Pass was the highest point along the original 2,800-mile route, appreciated for its reliable water, grazing, and shelter while crossing the desert—one stretch had no water for 75 miles. Remnants of the stage line’s outpost still stand near the Pine Springs Visitor Center in the national park along a paved, accessible path.

The nearby arroyo is bone dry, but it’s an easy family hike from historic Frijole Ranch to the pond at Manzanita Spring, and only a mile farther to the tree-shaded oasis of Smith Spring.

I could have followed the popular trails to Guadalupe Peak or El Capitan. Instead, I take the Tejas Trail, overlooking a steep canyon, called Devil’s Hall, up to Pine Top where I camp overnight among the piñons, with a spectacular view almost 3,000 feet above the surrounding plain. As the sun sets, I hear the pealing of an eagle, circling the heights. The next morning, I stand atop Hunter Peak, looking over the canyon toward Guadalupe Peak and El Capitan, able to clearly see the narrow trails zigzagging up their flanks. Hunter is the fifth-highest peak in Texas. A backpacker’s gear flashes in the morning sunlight from atop Guadalupe, but I have this side all to myself. Walking along the edge of The Bowl, I keep my eyes peeled for elk, then carefully descend Bear Canyon, the steepest trail in the park. No elk, no bears, and no crowds.

You can visit all of these hidden gems. With over 80 miles of trails winding through the area, day hikers can ascend the popular peaks or follow Devil’s Hall to a hidden spring; horseback riders can travel through former ranchland; campers can stay at Pine Springs or Dog Canyon,; and backpackers can journey through the heart of the Guadalupe Mountains. Just remember to bring plenty of water; the springs and waterholes are protected natural resources, just as they’ve always been.

Guadalupe Mountains National Park has more than 1,000 species of plants, from common desert species to plants that can only be found in the park. Ecosystems like the Chihuahuan desert, rocky canyons, and forests also support 60 species of mammals, 55 species of reptiles, and 289 species of birds.

Returning to the visitor center, I come upon six bicyclists resting in the breezy shade of the covered portico. They are refilling their water bottles and snacking on salty trail mix, their bike paniers laden with camping gear, their faces and arms sunburned. Six young people, all in their 20s, are traveling coast to coast. They started their trek on a Pacific beach near Santa Cruz, California, and will end by dipping their front wheels in the Atlantic near Wilmington, North Carolina. So far, they’ve pedaled for 29 days and over 1,200 miles across the country. Only 1,700 more to go. I tell them about the Butterfield Stage.

“This is the high point of our route, too,” says one young man. “It’s all downhill from here.” He grins knowingly. They were well aware of the potential for hardships to come on their journey. Their thirst quenched for now, they swing back into their saddles and ride off toward the east, following the long, quiet highway that has brought them this far, a road less traveled over the Guadalupe Mountains.