Off the coast of southern California, on a scattering of islands, lives a suite of plants and animals that are found nowhere else on earth. Five of these islands make up Channel Islands National Park. When the northern subspecies of the endemic Channel Island fox faced near extinction in the 1990s due to hyperpredation by golden eagles, the tiny foxes garnered the hearts and attention of millions around the world and inspired an impressive multi-partner collaborative effort to bring them back from the brink. This success story is well known – the island foxes enjoyed the fastest recovery by an endangered species in the world!

But did you know that there is another endemic carnivore living on two of the Channel Islands? Santa Rosa and Santa Cruz Islands are also home to the island spotted skunk, a pint-sized carnivore weighing between 450-950 grams (about the size of a grey squirrel). This lesser-known mammal has made the islands its home for thousands of years but has stayed out of the spotlight. When island foxes were absent from the landscape in the early 2000s, island spotted skunk detections increased dramatically. National Park staff and visitors to the islands saw (and smelled!) these tiny carnivores frequently. If you visit the islands today, you are much more likely to see a fox than a skunk. But why?

Channel Islands National Park hosts one of the first and oldest Inventory & Monitoring Programs in the national park system. These long-term programs were designed to track the health of the park’s ecosystems by consistently monitoring key species. Long-term datasets allow land managers to detect changes and respond rapidly and wisely to threats, using science-based solutions. This WNPA-funded research project is entering its second year as of June 2022.

These data imply a competitive relationship between island fox and island spotted skunk, with the skunk the subordinate competitor. But what drives the competition between these two mammals? Some clues may lie in the most unlikely of places… whiskers!

Whiskers are not just expressive face accoutrement. Similar to the rings of a tree trunk scripting a plant’s life span year by year, whiskers lay down atoms of carbon and nitrogen as they grow. These atoms, invisible to the human eye, hold information about what the animal was eating as the whiskers grew. How? Because the carbon and nitrogen come from their food! The story of an animal’s diet can be extracted from whiskers through a process called stable isotope analysis. For island fox and island spotted skunk, whiskers can tell us how much they are eating from different food categories, such as deer mice (a favorite), lizards, insects, and fruits. The carbon reveals which type of plants are at the base of the food web, while the nitrogen shows how high up the food chain the animal is eating. Interestingly – the same analysis can be done on human hair! What foods might be recorded in your hair? The longer your hair, the further back in time you can look. For island fox, one whisker contains about 4-6 months of dietary history.

The decline and recovery of the island fox offered a natural experiment by which to explore the competitive relationship between the fox and skunk at different population densities. Thanks to the foresight of biologists Angela Guglielmino, Seth Newsome, and Tim Coonan, whisker samples were collected non-invasively from foxes and skunks beginning in 2010, and sample collection continues to this day. This “library” of whiskers offers the rare opportunity to investigate a suite of questions in foraging ecology at the individual level. Through a collaboration with Dr. Seth Newsome (Center for Stable Isotopes at the University of New Mexico), Angela Guglielmino (UCLA Department of Ecology and Evolutionary Biology), Dr. Brian Cypher (Endangered Species Recovery Program, CSU-Stanlislaus), and Friends of the Island Fox, and with the support of a Western National Parks Association research grant, we are using whiskers collected non-invasively from foxes and skunks from 2010 to present to investigate how much the diet of island fox and island spotted skunk overlap with each other (ie. how much are they competing for the same food?) and how each species’ diet may have changed over time (with changing population density and fluctuating climate).

If you’re wondering why you’ve never heard of the island spotted skunk before (maybe even after visiting Channel Islands National Park!), you are not alone! It may be in part due to the skunk’s natural activity patterns. While island fox are cathemeral (active at all times of day and night), curious, undeniably cute, and drawn to places where humans also spend time, island spotted skunk are strictly nocturnal and shy. They are awake when we are normally asleep – out there doing their thing while we are tucked up in bed. This month, inspired by International Dark Sky Week and by your own curiosity to discover the unknown in familiar places, we invite you to engage in some temporal exploration. Be it your own backyard, or a spring break camping trip, spend some time exploring your environment during a time of day (night!) with which you are less familiar. If possible, do your exploring outside and away from human-derived sensory inputs. Close your eyes, and pay attention to what you hear, then what you can smell. Open your eyes and look up at the stars. And maybe take up a flashlight or blacklight and see who is out there! You never know what you might notice or discover. 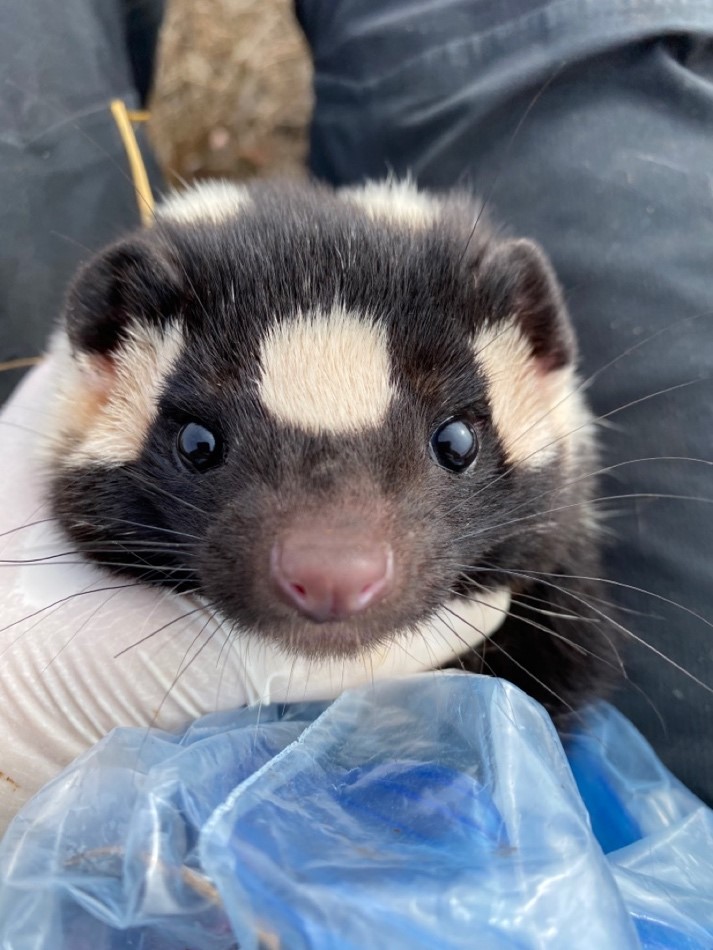